Greatest Days – The Official Take That Musical is Announced

Written by Jamie Griffiths on September 21, 2022 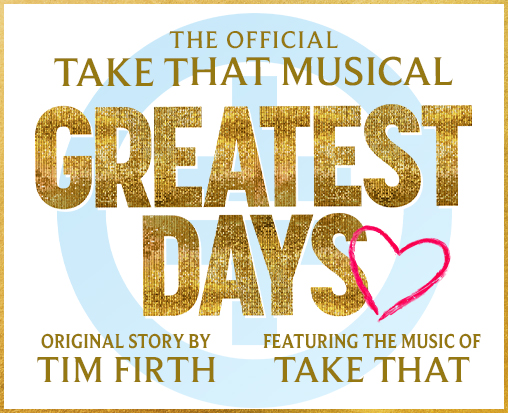 Greatest Days – The Official Take That Musical is Announced

Adam Kenwright is delighted to present Greatest Days – The Official Take That Musical, with a book by award winning playwright Tim Firth. The musical will embark on a major UK and Ireland tour from 5 May 2023 and will coincide with the summer 2023 release of the official movie version of this smash-hit musical, starring Aisling Bea and Jayde Adams. Greatest Days celebrates the 20th Anniversary of Take That’s first ever UK number 1 single Pray.

Greatest Days features more than 15 of Take That’s record-breaking songs alongside a heart-warming and hilarious story of love, loss and laughter. It was originally produced as The Band by David Pugh & Daffyd Rogers + Take That. Casting to be announced, as well as further dates in cities such as Blackpool, Glasgow, Bristol, Nottingham, Edinburgh, Southampton, Truro, Leeds, Leicester and Birmingham.

Gary Barlow, Howard Donald and Mark Owen are Take That in 2022 and continue the legacy of one of the most successful band’s in British chart history, with over 45 million records sold worldwide and 12 number 1 hits in the UK. Formed as a five-piece in 1989, they enjoyed immediate success with their first two albums charting at number 2 & number 1 respectively. Third album Nobody Else confirmed their global domination, selling over six million copies and topping the charts in 11 countries. The departure of band member Robbie Williams prompted a break-up in 1996 and nine years in the wilderness before the remaining four members reunited for 2005’s The Ultimate Tour. This sparked one of the greatest comebacks in British music history with Take That going on to release three number 1 albums in just four years. Robbie’s return for 2011’s Progress saw them break UK records for the fastest-selling album of the 21st century and fastest-selling tour of all time. Williams’ second departure, along with that of Jason Orange, left the remaining three members to release III, which was certified platinum. In 2019, the band celebrated their 30th anniversary with the release of Odyssey, a greatest hits album, which reached number 1, and a UK and European stadium and arena tour.

Tim Firth is one of the UK’s most beloved award-winning writers and composers in film, television and theatre. His extensive theatre credits include the Olivier Award winning musical Our House (West End), the UK Theatre Award-winning This is My Family (Sheffield Crucible), the MEN Award-winning Neville’s Island (Nottingham Playhouse and West End, Evening Standard & Olivier nomination) and Calendar Girls (Chichester Festival Theatre, West End) which broke all British records for a professional and amateur play, was nominated for an Olivier and won the Whatsonstage Best Comedy Award. Tim collaborated with lifelong friend Gary Barlow on Calendar Girls The Musical which had a successful run in the West End and then toured the UK and Ireland, winning a Whatsonstage Award and receiving several Olivier nominations along the way. Tim’s film credits include Calendar Girls and Kinky Boots. Recently, Tim co-created and directed Gary Barlow’s one-man show A Different Stage which has toured the UK and is currently running in the West End.

Take That said: “We are so thrilled that this new production now titled ‘Greatest Days’ is launching next year. We had an enormous amount of fun working on the original version and can’t wait to help bring this new production to over 30 cities across the UK and Ireland from May 2023.”

The musical follows a group of five best friends in the 1990’s who are obsessed with their favourite boy band. The girls then reunite more than 20 years later with a plan to see their heartthrobs one last time in what could be the Greatest Days of their lives.

The UK tour of The Band originally opened at Manchester Opera House on 8 September 2017 and closed in March 2019, breaking box office records along the way. The musical ran for a limited West End season at Theatre Royal Haymarket over Christmas in 2018/19.

Further venues to be announced