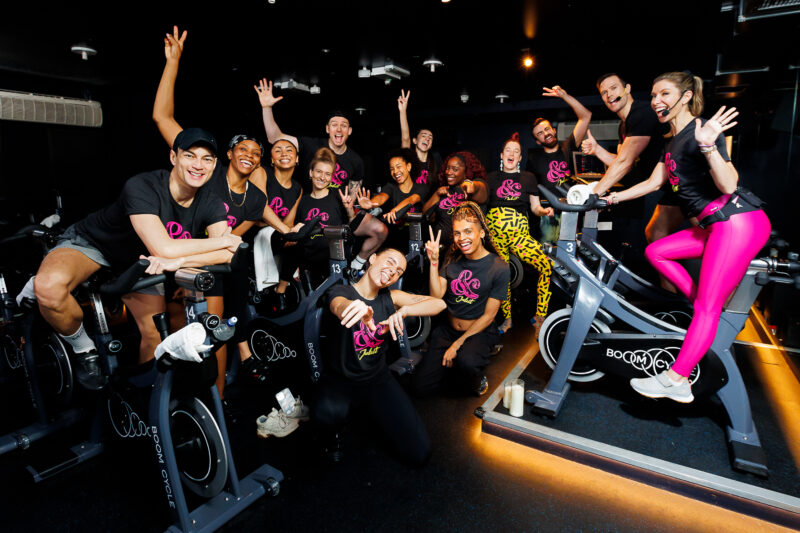 As we head into the new year, and people are returning to the gym, the hit West End musical, & Juliet is teaming up with Boom Cycle Indoor Cycling studios to provide & Juliet themed rides to their spin classes from 16 January 2023.

To celebrate the collaboration, twelve members of the & Juliet cast took part in a special spin class in Boom Cycle’s gym in Battersea and photographs from the day by Alex Rumford can be downloaded here.

Boom Cycle’s favourite instructors have choreographed & Juliet classes to Max Martin’s invigorating music, and there will be two & Juliet rides every week for one month from 16 January. Each week, riders who attend these classes get the chance to win tickets to this award-winning West End show.

The musical contains many of the biggest and most anthemic songs of the last 30 years, including Baby One More Time, Everybody (Backstreet’s Back), Love Me Like You Do, Confident, It’s My Life, Can’t Feel My Face and the roof-raising Roar.

& Juliet soars with the music of Max Martin, the acclaimed songwriter of some of pop’s most iconic songs and recorded by artists including Backstreet Boys, Justin Timberlake, Britney Spears, Katy Perry and Ariana Grande, all brilliantly arranged for the musical by Tony® and Grammy Award-winning orchestrator Bill Sherman.

Miriam-Teak Lee – who was awarded the Olivier Award for Best Actress in 2020 for her performance as Juliet – leads a cast including Cassidy Janson, who also won an Olivier Award for Best Supporting Actress for her portrayal of Anne Hathaway, Oliver Tompsett as William Shakespeare, Tom Francis as Romeo. and Malinda Parris as Angelique, the Nurse.

Brought to life by an award-winning creative team in an explosive fusion of styles, & Juliet is directed by Luke Sheppard with a book by David West Read (Schitt’s Creek), electrifying choreography from Jennifer Weber, stunning set design from Soutra Gilmour and costume design by Paloma Young.

Get more show information from the official & Juliet site.