Written by Jamie Griffiths on November 6, 2022

Disney’s Winnie the Pooh will be coming to the UK and Ireland stage for the first time in Spring 2023, with preview performances at London’s Riverside Studios (Hammersmith) from 17 March and an official opening on 26 March. It will then tour the UK and Ireland until September 2023. Tickets for Riverside Studios on sale at 10am on Monday 7 November, with Tour tickets on sale now.

The UK premiere will be presented by Rockefeller Productions, in partnership with ROYO, and in association with Disney Theatrical Productions. The role of Winnie the Pooh will be played by Jake Bazel, who originated the role on Broadway.  Further casting to be announced.

Deep in the Hundred Acre Wood, a new adventure is about to happen.  A.A. Milne’s beloved characters, Winnie the Pooh, Christopher Robin and their best friends Piglet, Eeyore, Kanga, Roo, Rabbit and Owl (and Tigger too!), will all arrive on stage in a beautifully-crafted musical stage adaptation.

In a new story from the Hundred Acre Wood, this fresh stage adaptation is told with impressive life-size puppetry, exciting new stories and featuring characters that have played iconic roles in the lives of children for generations. Accompanying the modern narrative is an original score by Nate Edmondson, featuring some of the Grammy award-winning songs written by the Sherman Brothers for the original animated features, including Winnie the Pooh, The Blustery Day, The Wonderful Thing About Tiggers and Whoop-De-Dooper Bounce, plus A.A. Milne’s The More It Snows (featuring music by Carly Simon) and Sing Ho in a new arrangement. 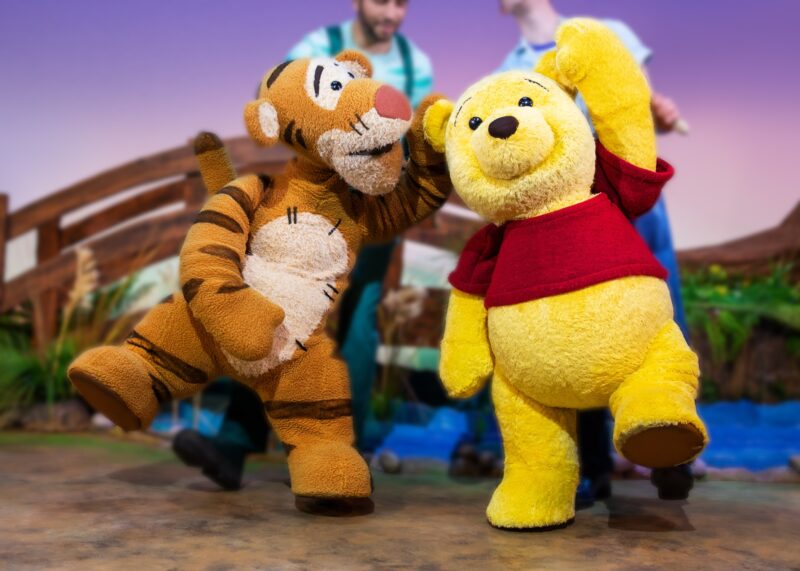 Winnie the Pooh: The New Musical Adaptation is developed and presented by renowned family entertainment creator Jonathan Rockefeller (whose spectacular puppetry is omnipresent in the acclaimed productions of The Very Hungry Caterpillar Show and Paddington Gets in a Jam).

Inspired by the beloved books by A. A. Milne and the classic Disney featurettes, the production was welcomed in New York in 2021, where it broke theatre box office records for the largest advance, with rave reviews where it was called “Enchanting!” (Time Out); “Winnie the Pooh: The New Musical Stage Adaptation is magical, sweet as honey, and full of humor. It’s a wholesome, delightful, enchanting piece of theatre,” (BroadwayWorld); “A perfect reintroduction to live theater. It’s a captivating adventure with spectacular puppetry,” (Mommy Poppins); “Charming and whimsical stage show that Pooh surpasses every expectation I had for it,” (The Laughing Place); “Winnie the Pooh is delightfully first-rate,” (Theatre Pizzazz); “Irresistible. ‘Winnie the Pooh’ is sweeter than honey,” (DC Metro Arts); “An hour of bountiful joy,” (New York Theatre Guide); “Mesmerizing and lifestyle puppets and original Sherman Brothers tunes, the beautiful new Winnie the Pooh musical is must-see,” (Theatrely); “The wonderful thing about musicals is that musicals are wonderful things. The New ‘Winnie the Pooh’ Musical Is Sweeter than Honey,” (Toy Insider).